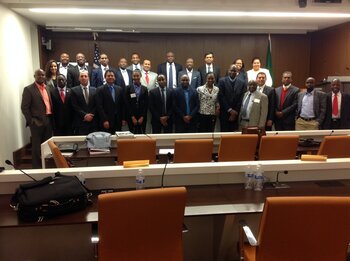 In fulfilment of its capacity-building mandate and in a quest promote increased US-Africa trade and investment, the African Development Bank’s NEPAD, Regional Integration and Trade Department (ONRI) and the African Development Institute (EADI) collaborated in a four-day training workshop for USA-based African foreign missions on trade and investment promotion activities in the USA.

The event, which ran from April 6-9 in Washington, was attended by 33 commercial attachés and African Union officials representing 21 countries, which included 11 women. Two investment and export promotion experts were recruited by the Bank to facilitate the training.

In his opening address, Eliachim Molapi Sebatane, Ambassador of the Kingdom of Lesotho and Co-chair of the Economic Development Committee of the African Ambassadors Group, expressed his heartfelt appreciation to the sponsors of this training – the African Trade Fund (AfTra) and the African Development Bank, as well as the African Union Mission to the USA – for hosting the event at its offices in Washington, DC. “This training course could not have come at a more opportune time, following as it does closely after important milestone initiatives in the relationship between the US and Africa,” he said. “It has also been demonstrated now and again that African Growth and Opportunity Act (AGOA) has helped spur the promotion of economic development relations between the US and Africa.”

Sebatane noted that, despite facing resource constraints, African embassies in the USA played a critical role in commercial diplomacy, which called for the type of skills and knowledge that this training would impart.

The training programme was developed in response to a technical assistance request received from the African Union Mission to the USA, which noted that while the US is a highly lucrative market, it is also a complicated and vast market for African officials undertaking investment and trade promotion. With 10 of the world’s 15 fastest-growing economies and a growing middle class, African commercial attachés were in a unique position to attract considerable US foreign direct investment (FDI) inflows targeting sectors such as infrastructure, consumer goods, financial services, healthcare and more. The USA imported goods worth US$2,757 trillion in 2013. However, Africa accounted for just 1.7% of total US merchandise imports (down from 2.2 per cent in 2012) – about the size of exports to the USA from South Korea.

On the other hand, Africa’s share of global FDI projects has reached the highest level in a decade, estimated at US $80 billion in 2014. According to Ernst and Young’s 2014 Africa Attractiveness Survey, Africa’s perceived attractiveness relative to other regions has improved dramatically from third last position in 2011, to emerge as the second-most attractive investment destination in the world, behind North America. Apart from traditional FDI flows dominated by Nigeria and South Africa, new FDI ‘hotspots’ are emerging in Africa in countries such as Ghana, Mozambique, Tanzania, Uganda and Zambia. Despite a 20% decline in USA FDI projects in Africa in 2013, the USA remained the second-largest investor in Africa behind the United Kingdom.

The training programme comes at a very important time when the US Congress is set to engage in debate whether to renew the AGOA, which is set to expire in September 2015. A major focus of the training was on utilizing market access to the USA under the AGOA. As a result of this intervention, better trained foreign mission officials will be able to use their skills to help their national exporters seeking to penetrate the USA market and support increased exports and investment flows between their respective home countries and the USA.

Participants were introduced to various methodologies for undertaking market research, making a sales pitch to investors or buyers, relationship building and providing after-care. The training also involved rich line-up of high-level officials from the US Government and private sector including Assistant Trade Representative for Africa from the US Trade Representative, Florie Liser; Vice-President, Corporate Affairs from Cargill, Van Yeutter; Director for Africa at the US Chamber of Commerce, Danielle Walker; Robert Whyte, Global Specialist for Investment Promotion at the World Bank; and Paul Ryberg, President of the African Coalition for Trade.

The second and advanced training week will take place from May 4-7, and will include peer-to-peer exchanges with other investment promotion agencies as well as a business-to-business networking event for the participants to put their skills into practical application.

Ambassador Amina S. Ali, Permanent Representative of the African Union Mission to the USA, thanked the Bank for its support in boosting US-Africa Trade and welcomed ongoing collaboration between the AU and the AfDB in the AGOA review process. Given the mandate of supporting capacity-building initiatives for regional member countries for better policy development and engagement, EADI and ONRI are collaborating to develop a follow-up multi-year technical assistance project for strengthen the capacity of national trade promotion agencies in Africa. This will go a long way towards fulfilling the Bank’s objectives under its Ten Year Strategy to increase Africa’s participation in global trade.

No comments have yet been posted, be the first to comment by using the form below:

Web design agency - Liquid Light
You are currently offline. Some pages or content may fail to load.